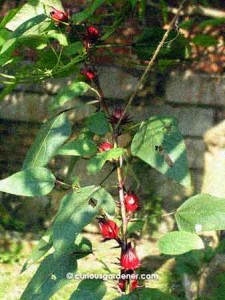 I had a pair of lovely, tall roselle plants in my edible plant corner. They were grown from seed, and were the first roselle plants I had planted directly in the ground to grow. As such, they grew much taller and stronger than my earlier plants, which were grown in pots. Once they passed the 1.5 metre mark, though, they tended to lean over. With a little help, however, they were kept upright. One has reached the height of my bean trellis and is happily mingling with the bean vines, while the other was latched onto by the bittergourd vines, which held it upright.

Everything was going well and loads of flowers bloomed, followed later by the amazing bunches of red calyces. I was getting quite excited about finally having a suitable number of calyces to try making a syrup from, and was biding my time to allow the two plants to produce more fruits.

And then… the contract gardeners arrived for their monthly visit, and when they left, I found that one of my nice, big roselle plants had been cut off at the base… >:( 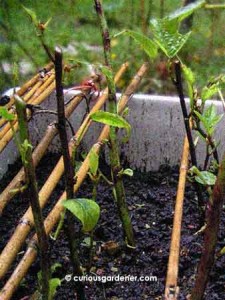 I really wanted to rant about this – I was so mad at them for cutting carelessly and at myself for not protecting the plant better. But, after considering it for a while, I decided to apply my philosophy of turning lemons to lemonade instead: I cut the entire stem into several pieces, stripping off the larger leaves, and stuffing the ends into earth. They may have taken one beautiful plant from me, but I decided to reap several plants in return!

Roselle plants, thankfully, grow easily from cuttings. They don’t need special care apart from the basic making sure the soil doesn’t dry out. They’re not even particular about the type of soil you plant them in, so I’d recommend this as one of the plants a newbie gardener could try growing.

Because I’d removed the big leaves that would have taken the stem more energy to sustain, the cuttings will be able to put more effort into generating new leaves. It will be about 2 weeks more before I transplant them.

Roselle plants are visually interesting to look at, with the red splotches on the stems, two shapes of leaves, and pretty pink morning-blooming flowers. Add to that the clusters of striking red calyxes and you have a treat for the eyes and imagination! I was planning on sowing more seeds to grow more plants, but cuttings will give me the same result in less time. I don’t know why I didn’t think of doing this sooner!