Just a few of the different kinds of sunflower seeds...

Now that I’ve tried growing a few varieties of sunflowers, I can see that my favoured method of sprouting ‘em in a ziplock bag doesn’t work all the time.

Certain varieties can germinate within 24 hours; some take their time, germinating one at a time; others just sit there until they turn mouldy.

Yes, I went a little Ziplock crazy for a while, until I realized some varieties didn’t respond at all. So I experimented with regular sowing and surface sowing, and got mixed results.

Generally speaking, the dwarf varieties seemed more responsive to ziplock germination; they’re also quite happy with surface sowing. The mid-sized to huge varieties were temperamental with all methods of attempted germination – I had lots of mixed results with them – and I have yet to succeed in germinating some varieties at all. 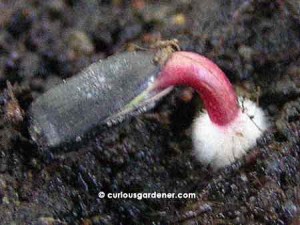 Even after the ziplock sown seed starts germinating, it may abort along the way. I’ve had several cases of happily transferring the germinated seed from the wet tissue to potting mix, only for nothing more to happen; or for the seedlings to grow for a while, and then run out of steam and die.

There could be any number of possible reasons for all this. It could be due to the stock of seeds. Maybe they’re a little old – seeds do have a certain life span before they lose their viability. Or maybe they’re basically difficult to grow. Or maybe they don’t like our climate. You just have to plant way more seeds than you want plants, because there will be casualties along the way.