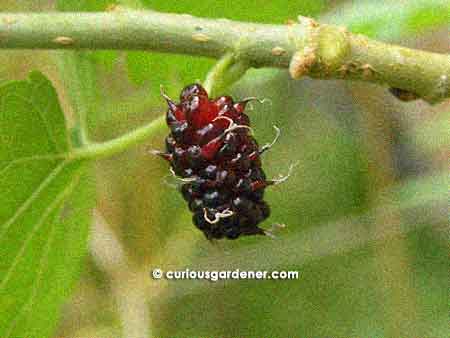 I’m embarrassed to admit that our first mulberry flowered and fruited without my notice. I know I was warned that the plants don’t have to be lush in foliage to start fruiting, but all three mulberry plants that I grew from cuttings have been slow growers, and I didn’t have any expectations for them and wasn’t checking them often. For goodness’ sake, this plant has less than ten leaves on the entire plant! The only difference with this one is that it took root where I left it in the garden while I procrastinated in getting a bigger pot to transplant it to. Story of my life. I’m always out of flower pots.

So, it was by pure chance that I saw this fruit – could it have had others to keep it company? I don’t know! – when I was checking out something near the base of the plant. The odd, dark shape dangling just beneath the very last leaf caught my eye, and I thought it might be a caterpillar’s cocoon hanging there.

Yes, caterpillars have been making the rounds, but that’s for another post…

Imagine how stunned I was when I realized that I was looking at a very ripe mulberry fruit!

The fact that this fruit was so dark in colour testified to its maturity – they apparently go from white/green to red to black. They’re still tart when they’re red, and sweetest when black – so I’ve heard. I took my chances and left it to ripen on the plant for another day. I figured if a bird got it then at least there would be more in the future…

Besides, it was just this “big”: 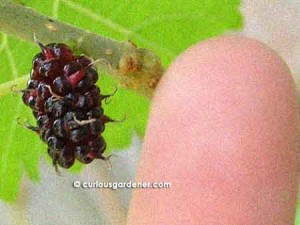 Mulberry vs index fingertip - mulberry wins for cuteness... Why does it make me think of SpongeBob???

Yup, smaller than the tip of my index finger! LOL

The following day, it had darkened such that you could only see the tints of red if there was light shining from behind it. I thought I’d take one last picture before plucking it, and that’s when I discovered that the fruit drops off very easily when it’s ripe!

It fell off the stem when I moved it to get a good photo angle, and almost disappeared in the long grass around the plant (yes, I need to weed more often – another story of my life). When I picked it up, I found that it was so soft that it squished a little, even though I was gentle. And that’s when I discovered that mulberry juice is purple and I hoped it wouldn’t leave a stain.

It can, just a little…

The moment of taste-truth was finally there, and to savour it just that little more, I tasted the juice on my fingertips first. It wasn’t overpowering or unpleasant, and I couldn’t form an opinion from those few drops. So I popped the rest of the fruit in my mouth – sans stalk, which was still attached when the fruit dropped – and had the rather enjoyable experience of feeling each of those little pips take turns popping in my mouth, releasing little explosions of tart and mildly sweet mulberry juice. The fruit was so tiny that it was over almost as soon as it began! The tart, stinging sensation on my tongue lasted for a quite while, though. LOL. I think chilled mulberries on a hot day are going to be just heavenly! I’ll just have to accumulate enough of them first…

So, it’s taken more than half a year to reach this point, after getting my cuttings, but then there was that period where I thought they were all going to die, when all the leaves fell off. I don’t think that was normal, but hopefully things start progressing as they should from now. Oh yes, and that I succeed in getting progressive photos of the fruit’s development as well! 8)