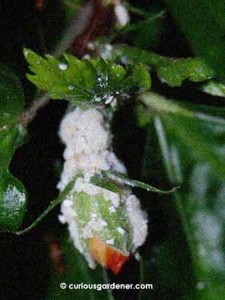 Last year, just before I decided to start growing edible plants, I realized that a somewhat neglected and overgrown part of our garden was infested with what I eventually came to call “The White Brigade”.

There were all kinds of white pests clustered under that nice thick canopy of plants – tiny white flea-like insects that flew off in a flash, diamond-shaped segmented fluffy-looking things that could also jump and seemingly float away, round white ball-like things, clusters of cottony white stuff, oval white cocoon-like things stuck firmly to stems… it seemed never-ending.

Since then, I’ve learned that these were whiteflies, aphids and mealy bugs – pests that are essentially vampiric in that they suck the sap from leaves and stems, thus weakening plants, making them prone to diseases and eventually killing them. All I knew at that time was that they were infesting my plants, so I did a lot of massive pruning, followed by a few rounds of spraying insecticide before they finally diminished. 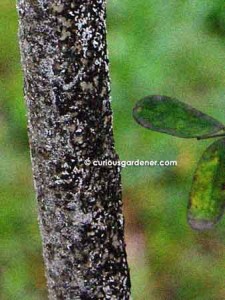 I think these are aphids on the Peacock tree stem. There are so many of them that it looks like it's snowing. Also note how unhealthy the leaves on the tree have become.

I thought that was it, but I was wrong.

Aphids, I think, are now attacking my established Peacock trees. They are clustered so thickly along many of the more woody stems that you can see the white from a few metres away. Like mealy bugs, aphids also secrete a kind of nectar that attracts ants, so there are ants on the trees as well. The ants also discovered they could make a home within the woody stems, and this further weakened the plants. Pruning those are not fun, firstly because Peacock trees are very thorny, and secondly because of the ants that emerge from the pruned branches, not happy at being disturbed – and they are biting ants, I might add, too. I only do a few branches at a time because of the unpleasant nature of the job, and I still can’t tell if I have to get rid of the trees completely or not. Drat those pests.

The mealy bugs, too, have returned with a vengeance. They went first for our hibiscus plant, then appeared on my kangkong plants, sucking them dry until they were weak and dying. 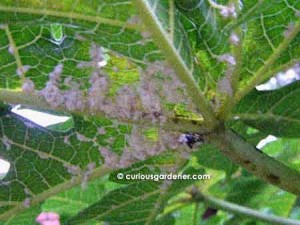 Growing colonies of mealy bugs under a papaya leaf. Also see the horrid black mould at the leaf junctures :(

Now they have infested my biggest Red Lady papaya tree, causing all the flowers to abort because they were so infested. Looking at the underside of the leaves horrified me because of the sheer clusters of cottony mealy bug bodies colonizing the area. I cleaned by hand and even, in desperation, sprayed the plant a few times, but they wouldn’t disappear. Black mould also developed because of the nectar secretions, and I couldn’t clean it away completely. There are just too many inviting nooks and crannies for the mealy bugs to congregate on a papaya tree that I’ve given up on that plant. Making that decision was heartbreaking, but it just was not salvageable. I hope my other papaya trees are not as unlucky. 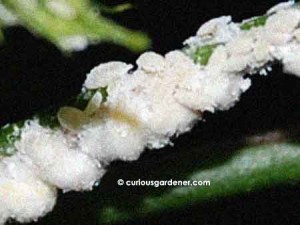 So, these days I am on a prune-and-destroy mission – removing whole parts of infested plants and bagging and trashing them as fast as possible. If I could, I’d burn the plants immediately, but we can’t do that here any more. So it’s straight into the trash bag and out the gate with my fingers crossed that the pests don’t escape and return to the garden. Did the rainy weather bring on the White Brigade infestation? I don’t know …but I’ll be watching carefully so I can try to circumvent them in future. It will be a tough fight…