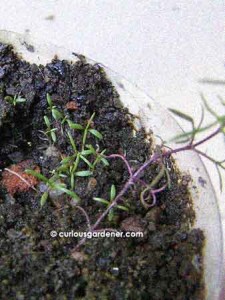 I don’t believe it! More than seven months ago, I scattered seeds of the Dahlberg Daisy in a self-watering container. It took about 1-2 weeks for two sprouts to appear. One died, the other grew …in slow motion.

Now, still in the same container – more than seven months later – there are suddenly more than ten sprouts!

Why did these seeds take so long to germinate? Could it be that they needed to go through a “change of the seasons” to sprout? After all, we’ve just had our equivalent of winter – cool tropical winds, rain and temperatures – that has begun to give way to more sunny, windy days. Could this have been the signal to the seeds to sprout?

Note to self: refrigerate a new set of seeds and sow them to see if the temperature change is the key. Also sow a new lot of seeds as a contrast to the refrigerated lot.

I’ve had such faith in our year-round tropical weather that I felt we could plant anything at any time and it would just grow. How humbling to learn otherwise.