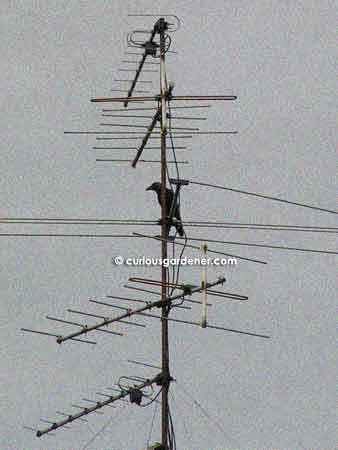 A menacing crow up high on an antennae.

I hate it when the crows move into the area and start nesting. They are annoyingly territorial when they have young to look after – even if you’re not threatening them – and when you do threaten them, they remember and hold a grudge.

Many years ago, my dad – he of the soft heart – had the habit of feeding the birds in the garden. Unfortunately, one day, the crows discovered the bread that dad used to put out, and descended on the garden. I didn’t like the racket they were making, and I especially didn’t like that they got aggressive with our dogs when the dogs went to investigate what the noise was all about, so I shooed them away. They flew off, but perched nearby, squawking angrily at me.

A few days after that, I was on the porch roof clearing the gutters when something knocked my head from the back hard enough to jerk my head forwards. I looked up and saw a crow flying off. Huh, I thought, how clumsy – and I bent back to my task. But then I saw the crow jump off the roof it was on and head in my direction again. When it saw me looking at it, it veered off, but kept trying to sneak up on me again and again, cawing noisily when it was perched somewhere. It was extremely unnerving.

That was when I discovered how crows are intelligent enough to recognize people, and are malicious enough to hold a grudge.

The roof incident wasn’t the end of it. Every time I walked outside, the crows would start squawking an alarm, and the bull crow would stalk me. You can’t miss the bull crow – he’s big and has a very round head with almost no neck, and he’s very aggressive. It got to where I had to walk under an umbrella to avoid them, but that didn’t stop them from making a lot of noise and dive-bombing attempts. This treatment lasted for about a week, then they seemed to think they had taught me a lesson, and finally left me alone.

My experience from then taught me to avoid doing anything to threaten crows, especially when they’re nesting. Private ownership of firearms is not legal in Singapore, so control of such nuisance birds is handled by the authorities. I am more than happy to call in the folks at the National Environment Agency (NEA) to take the responsibility for chasing away the crows. But, the damned birds are so smart that they can recognize the NEA bird culling van and know there’s imminent danger. The alarm is sounded immediately, and soon every crow in the vicinity is calling out and flying higher and higher. The crows are so smart that they fly just high enough so they are out of range of the ammunition.

I think these crows moved into our neighbourhood because there’s been a lot of roadside tree pruning going on. Heavy rain and strong winds have caused a lot of damage in recent months, and our efficient authorities have been busy getting very tall trees pruned – there are a lot of very bald trees around right now! Unfortunately, I think this made refugees of many birds, with the crows among the casualties. Hence the irritating crows coming to our area.

For a few weeks now, I’ve been awakened by ugly crow noises from the curry leaf tree near my window. Baby crow makes weird growly squawks while the parents caw in reply from wherever they are. I daren’t shout or show my face, but I did discover that playing some not-too-loud music drowns the sound out and seems to put them off. After a good 15 minutes or so, when I put the volume down, there are no more crow sounds outside. Maybe I should get the whole neighbourhood in on this and see if we can use loud music to convince the crows to move to another location…