Have you ever found yourself in possession of seeds that you were impatient to sow and watch grow? I’ve been in that position so many times, especially with seeds given from other people’s gardens. You seem to start off with so many seeds and you think you’ll plant more than you need, to give some allowance for fatalities, because there always are some along the way – seeds don’t sprout, seedlings die off if you forget to keep them happy, young plants get attacked by pests, etc. 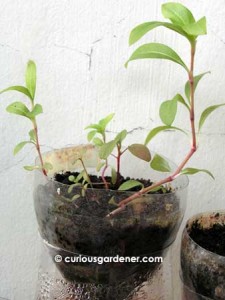 I’m going to talk about my Bachelor’s Buttons (gomphrena globosa) in this case. I was given a couple of dried flower heads, and decided to start with one. I prepared a self-watering container (SWC) and broke up the flower head over the earth, then mixed them in so the dried petals and seeds (which I couldn’t identify from the dried petals) were just beneath the surface of the soil. Then I let the SWC do it’s work to keep the soil moist and I minded my own business.

The first sprout appeared 5 days later. The second sprout popped up 5 days after that. They kept each other company for 2 months – still in the SWC since I tend to procrastinate transplanting plants – and suddenly I noticed that a new plant had germinated! Now, more than 3 months since I first planted the seeds, there are even more sprouts still appearing. Still in the SWC. So I finally decided to give the plants their freedom and plant them out in the garden. Since I was concerned that there could be more viable but dormant seeds in there, just biding their time, I decided to try to keep as much as the top of the soil intact when I transplanted them. In Singapore, we have a term for that – it’s called being kiasu, or scared to lose out. I absolutely resent the idea of wasting any good seed left in there, and I will try to observe if any more sprout in the coming weeks.

What this situation with the slow-to-sprout seeds shows is that seeds will start germinating when they are good and ready. I haven’t figured out the conditions yet, because I have other pots where I’ve planted seeds but nothing has happened. Or, one plant started growing and that was it. The notorious non-sprouters for me are marigolds, coriander, basil , nasturtiums and Dahlberg Daisies. Either I haven’t given them the right conditions to grow, they’re not ready yet, or the seeds are non-viable. I am almost tempted to just toss the seeds here and there in the garden and let nature choose where to let what grow – but then I wouldn’t know what was what. Is this a situation of nature versus nurture?