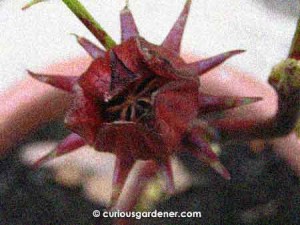 Notice the brown seed capsule within the red calyx?

When my roselle plant went to seed and started sprouting from the pod encased in the calyx, I thought I’d leave it alone to see what would happen if it was left to it’s own devices. However, when the leaves of the sprout growing out of the pod began to shrivel from lack of water inside, I immediately changed my mind and plucked the fruit. No surprises there!

First things first, I think I need to get the terms correct. The red exterior is the calyx (plural: calyces). That, and the flowers (when dried), are the edible parts.

The roselle seeds, and the sprout that grew from the pod, exposed after stripping away the calyx.

Within the calyx is the seed capsule. It is segmented and appears to contain two seeds in each segment. This capsule is initially light green in colour, then turns brown as it matures.

So back to my plant. I broke away the calyx to get to the seeds inside. The seed capsule had deteriorated to the extent that each segment of it was a hard, translucent shell. There was quite a bit of slimy goo inside as well – I suspect a combination of the water that had been trapped inside and the degrading capsule. Between the shell-like pieces and the goo, it took a while to extract all the seeds. The seeds were black and between 2 to 4mm big.

A few more had also begun to sprout, but were nowhere as advanced as the one that had caught my attention. All of them have been placed in a pot filled with potting mix and topped with a layer of cocopeat to keep the moisture in. One of the sprouting seeds has already broken through and has opened its seed leaves. I’m hoping that more follow suit as I’ve promised some plants to friends when I have them. So far, though, it’s just the two plants that are growing. Let’s hope they’ll be joined by more, soon!