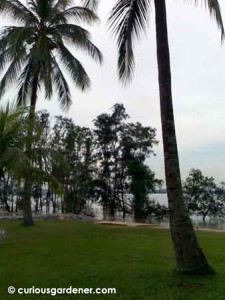 It’s really odd to talk about seasons in Singapore, because as an island just off the equator, we pretty much have rain and sunshine throughout the year. The only difference is when the seasonal monsoon winds change direction – that affects the temperature and to a certain extent, the humidity.

Some people may be appalled to know that we have close to 100% humidity all year round. In fact, the humidity level has never gone below 60% and has hit as high as 97%! (See weather statistics) Just thought you’d like to know…

The reason I’m ruminating once again over the weather is because our version of “Christmas” weather has begun. In this case, it’s more windy than normal, the sunshine is exceptionally bright and lighter in shade, and the air has a coolness that you don’t feel at other times of the year. There is a slight drop in temperature thanks to the strong, gusty breezes and frequent cool showers of rain. Obviously, there’s no snow. After the weather we’ve had this year, I won’t say that we have excessive rain to equate the cooler season, although our highest rainfall is typically in December. However, with the extra rain we’ve had this year, maybe the weather patterns are changing. Who knows. 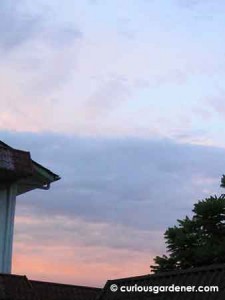 This sense of the holiday season hearkens back to being a student. The “long” school holidays are at the end of the year, from mid-November until New Year’s Day. So I assume that everyone who has grown up in Singapore shares this ingrained-in-the-bone feeling with me: as soon as I feel the weather cool and the winds pick up, I associate it with Christmas and being on holiday, without care in the world. It’s just one of those things, happily.

So, yes, folks who need snow to feel the yuletide mood, this is what those of us who live in the tropics experience. However, I admit that the idea of Christmas in the summer, as those who live in the lower southern hemisphere experience it, is a little odd to me. It’s all in the manner of where and how you grew up, I guess. We can get used to almost anything if we want to. Anyway, it’s time to start getting ready – it’s less than a month to Christmas! 8)