One thing about living on a tropical island is the astounding number of migratory birds that pass through. I didn’t realize what a variety there are because I used to be one of those people who didn’t pay much attention to the fauna around until I had a nice camera in my hand and was looking for willing subjects. Only then did I realize that it was more than mynahs, doves and pigeons that came to our garden. Many birds come and go so silently that you only get a glimpse of them, and using a camera to capture their images is the only way to be able to identify them. 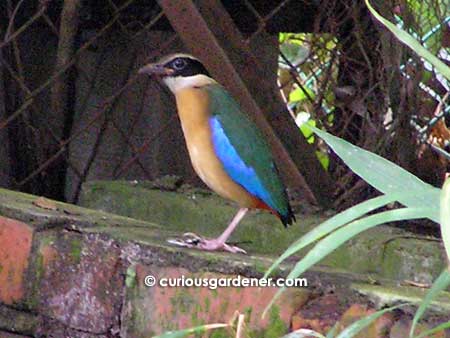 A few days ago, I caught a glimpse of what I thought was a brown shrike. The shrike usually visits a few times a day, hunting for live food on the ground. In fact, this bird had a similarly coloured underbelly, as well as a black band across the eyes. What was odd, however, was in that quick glance, it seemed bigger than normal, and was on the ground, standing on the edge of the drain and watching the ground under the mango tree. I’ve never seen a shrike on the ground for that long. So, out came the camera, and the hunt began.

It wasn’t easy to get a good picture of the bird – lighting was not great under the dense canopy of the tree, but fortunately I knew enough of my camera to use the fastest speed to brighten my shots. Several blurred photos later, I was thrilled to finally get a picture in fair focus, and was amazed at the colouring on this bird! Besides the peachy-brown belly, it had green wings that were edged with an iridescent blue, as well as a red patch at the, ah, vent area. The black stripe across the eyes seemed similar to that of Black-naped Orioles, going around the head, but broader. 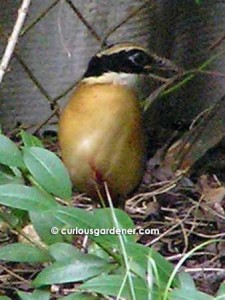 The Pitta from front view - see why I thought it was a shrike?

Some online hunting revealed the identity of the bird – the Blue-winged Pitta (Pitta moluccensis) of the Pittidae family of birds. They can be found in Asia, Australia and parts of Africa, and are particular to moist forest floors. That would explain why it likes the overgrown and leaf-littered corner of our garden, particularly at this rainy time of year…

They apparently feed on snails, insects and other invertebrates, so watch out, you garden pests! *evil laugh*

I read that they over-winter here in Singapore but are normally wary creatures. The Pitta certainly didn’t fly away when we stood at a distance observing it, but if we stayed too long, it got nervous and disappeared. However, it returned shortly thereafter to almost exactly the same spot each time.

What excited me most was that Pittas are supposed to be territorial with their wintering grounds. Since it’s been here sporadically for the past couple of days, I hope that means that the corner of our garden that’s a bit overgrown can be considered as wintering grounds for it. The only problem is, our dogs have good hunting instincts and love chasing birds. I hope the Pitta has good survival instincts honed from living in the wild and will not become a casualty. It’s kind of fun to look out and try to spot it amidst the shade and leaf litter under the mango tree. I really hope it stays for a while. You know me, I like new stuff in the garden!

Learn more about the Blue-winged Pitta: