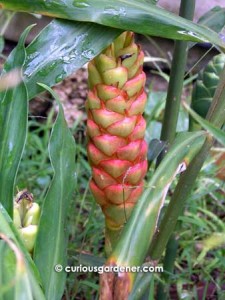 It’s been almost 2 months since I shared those lovely photos of the flowers of the culinary ginger plant. Since that time, even more of those beautiful deep red flowers bloomed on the flower head – sometimes in pairs, but usually individually. Once the plant was done flowering, the flower head (for want of a proper name) began to take on an orange tinge. The colour deepened more and more, and I waited to see if it would become as colourful as the flowers.

It was not to be.

What you see in the picture was as orange as it got. I don’t know why it did this, but obviously it had served it’s purpose. A few days later, I found the flower head on the ground because the succulent stem had broken near the base. Perhaps one day I’ll know why the plant behaves this way. After all, the sites I’ve visited have said that the flowers of this plant don’t really do anything. But nothing happens without a reason in nature, does it?