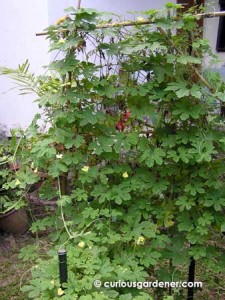 Pretty much a U-shaped trellis for the bittergourd - once the vine reaches the end, I turn it back onto itself.

First, the vine has to grow to a certain length before it is matured enough to start producing good fruits. My sad excuses of trellises for my beans probably resulted in their short lives. I still haven’t had time to construct bigger trellises, so I haven’t had a chance to prove this theory with the legumes.

However, in the case of my bittergourd vine, I’ve been turning the vines back on themselves to keep them on the little trellis, and that seems to have worked. To date, we’ve enjoyed many of the tiny fruits – as have the birds, because I don’t always spot the fruits in time.

The angled loofah vine has also been growing, despite my lack of attention to it. Yes, the vine that I expected to weave itself into the chain link fence instead made its way to the top of the fence, where the light was strongest. It then kept growing along the very top of the fence like it was a private highway, and I lost sight of it as it passed behind a shed. However, peering around the roof from time to time revealed flowers but no fruits. 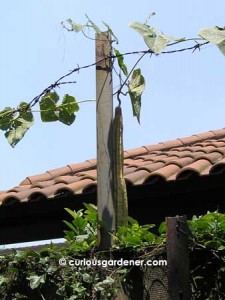 The loofah that escaped my attention because it was hidden behind the fence support. What a pity - it was a whopping 47cm long!

The older part of the vine began to shed leaves, and caterpillars once again voraciously ate more leaves, and I thought it was another goner. So even though the tip of the vine kept on growing along the top of the fence and then weaving itself through a taller bushy plant growing there, I lost interest in it.

It didn’t die and it actually fruited! I just discovered the first natural loofah hiding behind a fence support! I say “natural” because the first fruit was the one I got from hand-pollination months ago, that didn’t grow to full size. This one is much, much bigger, but unfortunately a bit too old for eating because I didn’t see it sooner.

The good thing is that once I noticed it, further inspection revealed another two fruits that can be harvested soon. One was hiding behind the shed roof, and the other, within the bushy plant. I can see that spotting subsequent fruits will be an interesting challenge because they’ll probably be somewhere in the middle of the other plant! 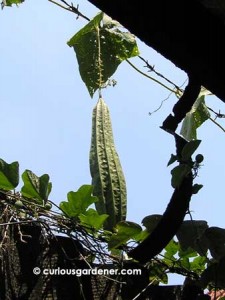 The other loofah that escaped notice because it was behind the shed roof.

So, lesson one: give the vine plenty of room to grow. I’d estimate the loofah vine to be more than 10 metres long now.

Lesson two: don’t try to force it to bear fruit via hand-pollination. When it’s good and ready, it will do what comes naturally, and it will do it well. 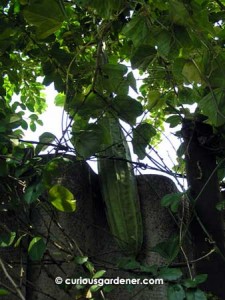 The final (for now) loofah that was missed because it's intertwined with another plant.

I guess I now have to eat my words about the loofah being a dismal failure, but I’ve never been happier to be wrong about something!