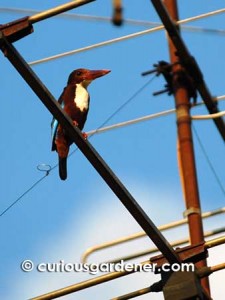 The kingfisher on it's high perch

We have an occasional evening visitor – an electric blue kingfisher that arrives as the sun begins to set.

It flits in quickly and silently, landing on the defunct TV antennae.

We used to think that it was simply a resting spot for the bird before it turned in for the day.

The reality was, it had a purpose. It was there to get some supper before going to roost – snacking on beetles that are attracted to our mango tree.

These insects only appear as the sun goes down, and they are drawn to the mango tree in a noisy, buzzing swarm. This frantic activity around the tree attracts the kingfisher, which waits patiently on it’s perch, normally the antennae, then suddenly swoops off. Seconds later, it returns to the spot, beetle caught firmly in it’s beak – I assume one that has been caught in mid-flight. The kingfisher then proceeds to whack the beetle on the bar it’s perched on before it consumes the insect. We normally know that the kingfisher is around when we hear the metallic thunks on the antennae. The bird catches and eats a few beetles, sometimes staying until twilight, then leaves with a loud kingfisher call.

I wish it would bring more friends and relatives to feast on the beetles.

Read more about the kingfisher…