Last weekend was a long one for us in Singapore as we celebrated National Day on Monday. Like many other gardeners, I suspect, I took advantage of the extra time to get things done in the garden.

First, there was the addition of the roselle cuttings. They seem to have settled down into their new home and are putting out new leaves. The growing tip that had some buds showing, however, seems to have aborted. Oh well, there will be more buds in the future, and I’d prefer that the cuttings put their energy into developing their root systems instead … for now, anyway. 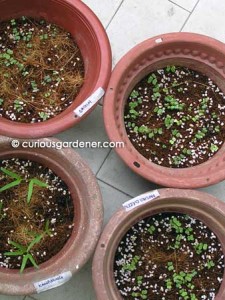 The next thing I did was to get out the bulk of the seeds that I wanted to plant. A whole new generation of leafy veggies has been planted – green and white pakchoi, as well as caixin and kangkong (water spinach). Herbs have been added, too – chives, Roman Chamomile and a new lot of coriander; and fruit vegetables like brinjal (long green and short purple varieties), cherry tomatoes and chillies. For ornamentals, I’ve planted a new lot of Dalhberg Daisies (because the first attempt wasn’t that successful), yellow Cosmos and white Zinnias. The leafy veggies sprouted within a couple of days, and I’ve been avidly watching their progress.

What tired me the most was planting the Red Lady papayas. I read that they need to be planted directly as they’re sensitive to transplanting, so I took the time to weed and prepare four locations for planting. I could have done a single bed, but that would have been even more area to clear – and more worms to upset and displace! So those babies have been planted, finally, and I hope they grow well. Now all I have to do is work on my bigger trellises so I can plant beans again. Hmm, when’s the next long weekend?