It’s been about half a year since I made the decision to grow edible plants, and I decided to pause and reflect on how it’s turned out.

The loofah didn’t turn out well at all. After all the ups and downs of getting the flower pollinated, one of my two vines – the one with the only growing fruit on it – was wiped out by caterpillars that ate the leaves. That killed the fruit and plant.

The remaining vine is still making its way along the fence, but doesn’t seem to be in a hurry to fruit. Would I plant more of this? Probably not. I don’t think I have suitable growing conditions for it here.

The long beans did pretty well. I suspect I need to give them a bigger growing space to extend the growing season, though, so I’ll have to work on a bigger trellis for the next round of planting. This first try was to get my toes wet…

The same probably holds true for the snap/French beans. That trellis was embarrassingly short and I’ll be interested to learn if the trellis height will affect the growing season, because they didn’t last long at all.

So that means yes, I’ll be growing beans again!

Cucumber season was pretty short, too. I’d blame the weather, but I probably didn’t water and fertilize the plants as much as they needed – and I think the spot I planted them was too hot for them. They will get another chance to grow.

The bittergourd plant that started growing in my pot of dracaena surculosa is actually doing pretty well. It’s fruited a few times, but the fruit are the miniature type. I probably won’t propagate it, but it was fun to watch how it developed. 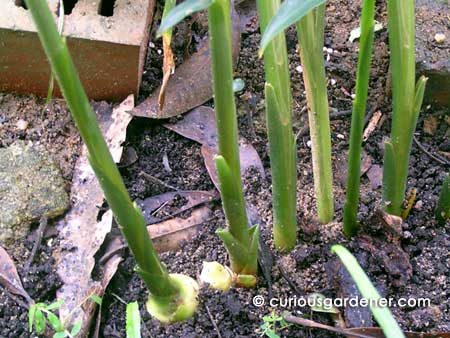 I think my ginger plants are doing pretty well. The best plants are growing in semi-sunlight, and I’ll definitely put future plants in similar locations. I’ve noticed that too much shade and too much sunlight just don’t suit ginger. So, yes, ginger stays on!

Rosemary is a tough plant for me to sustain. I’ve been through 3 plants already and they just didn’t stand a chance. Will I keep trying? Probably. It’s one of the herbs we use in cooking and I love being able to go and snip off what we need. My advance apologies to the plants I eventually acquire because of their uncertain fate in my hands…

Mint, when watered generously, does pretty well. I’ve had some fun experimenting with propagating it in water and in earth, and now have a couple of small pots of it. I love the scent (I love it more in chocolate!), and it’s staying!

My Thai basil plants are doing pretty well. They were recently planted out and seem to be happy. The sweet basil, unfortunately, didn’t seem to like it’s new home. It developed black spots on the leaves, and the stems soon followed suit and shrivelled up. We use it in cooking, so I’m going to try growing it again! If the climate in our garden doesn’t suit it then I’ll bow out gracefully. Lemon basil is currently growing from seed, and I hope it will eventually thrive.

The okra was a resounding success … until the caterpillars came along. However, eating freshly harvested veggies was an enjoyable and tasty experience. We did a taste-test comparing home-grown to purchased okra, and ours was sweeter and more tender. This will be a staple in our garden and I’ve already planted more seeds!

The pepper paprika from Thailand is doing quite well. There are several flowers and possibly a fruit or more forming. If they grow successfully and if they’re tasty to eat, they’ll stay on.

The sweet potatoes are still growing. Well, at least the leaves are spreading like crazy! I’m not sure how much longer it will be before I can harvest them and decide if I want to grow more of them. They’ve been growing for about 4 months now and I’m hoping that the crazy rainy weather we’ve been experiencing lately is not adversely affecting the growth of potatoes underground.

It’s also a wait-and-see situation with the bangkwang/yam bean plant. In this case, I’m waiting for the pods on the plant to mature so that I can harvest them and try growing the plants from seed.

I have a couple of tomato plants growing as well. They’re not at fruiting stage yet (if they reach it *cynical laugh*), so their fate will be decided at the next stock take. 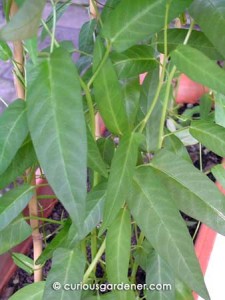 The sweet corn was a complete flop. I didn’t have enough plants growing simultaneously so there wasn’t enough pollen around to fertilize the silks. Because of this, the ears were empty. Besides that, I should probably have grown the plants in a more sunny spot, and fertilized them more aggressively. I still have a bunch of seeds, so I’ll give them one more try in a new location. If the plants don’t bear fruit successfully, I may not try growing corn again.

My leafy vegetables didn’t do too well either – which is why they weren’t mentioned, except in passing…

I tried growing caixin and pakchoi, but they didn’t grow well at all in their pots. I’ll try again and finish up my supply of seeds before I throw in the towel. The water spinach, however, finally took and is in a more vigorous growth stage, so that’s a saving grace.

What didn’t sprout at all were the chilli and brinjal seeds. The seeds were given to me but were probably not viable any more. I’ll get new seeds and try again.

Well, I’m going to try growing some new herbs: coriander, parsley and chives. I’ve got seeds from a few sources and thought it would be fun to try growing them. I don’t have high expectations, not with my track record, but it would be great if a few of them sprouted and grew!

I managed to get some seeds for the four-angled bean, but haven’t planted them yet as they need a higher trellis. Building trellises is at the top of my list of to-dos if I want to plant beans again! On the downside, I’ve heard that the four-angled bean is not cooperative when it comes to sprouting, but I have my fingers crossed!

For a bit of fun, I got some seeds for growing peanuts, which should be good for adding nitrogen to the soil when rotating crops. My decision was also swayed because my dad’s family grew them during the war, and it’s one way to experience a part of the family’s past.

A few of us at the GCS Forum also banded together to get some Taiwanese Red Lady papaya seeds. It looked too good to pass up – the plants aren’t overly tall, and they’re absolutely loaded with fruits! So I naturally rose to the challenge of wanting to get seed to grow into fruiting tree. If enthusiasm counts for anything, we should be feasting on papayas in several months. If not, then I’ve got quite a few seeds to keep trying with…

I also came across a thread at the Forum about growing mulberries, and now I want to try growing them as well. And wild cherries, if I can get a plant. My mum has fond childhood memories of eating the cherries from wild plants, and I’d like to grow them, if I can. If anything, these plants will attract more diverse birds to visit!

I also plan to introduce more ornamental plants to the garden. In the works are Zinnias, Bachelor’s Buttons, Dahlberg Daisies, Cosmos, sunflowers and marigolds. I know they’ll add lots of beauty, but I hope they won’t invite their share of pests and problems, either.

So that’s where my garden stands, and where it will be heading soon. Wish me luck!