Okay, you should be familiar with me and my methods by now – I see something and I want to plant it to see how it develops.

I was at market one day when I saw a small bangkwang that had part of the stem and root still attached and apparently still alive. Of course I bought it to plant it! Before committing it to earth, literally, I paused to do some quick research so that I’d give it a fighting chance to thrive.

For those of you unfamiliar with the name bangkwang, I’m talking about jicama – also known as the Mexican turnip or water chestnut, or yam bean – from the Pachyrhizus genus.

What I found was fascinating to me…

The bangkwang plant is a vine in the legume family. The edible part of the plant is the tuber, produced underground, as tubers are. After it flowers, it produces pods that aren’t edible …but you can grow new plants from the seeds in these pods.

I was hooked – I had to get it to grow to seed stage so I could start the cycle from seed!

So began Part 1 of my great bangkwang experiment… 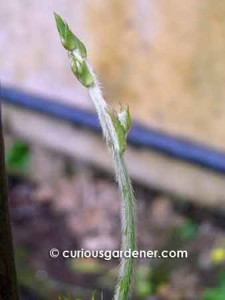 Top of the vine. See how hairy and serpentine it looks?

The bangkwang was rapidly planted in my veggie patch with a 1.8-metre tripod set above the little tuber. It took 2 weeks for a green shoot to appear, and it was a pretty sinister looking shoot. Hard, covered thickly in white bristly hairs and looking very serpentine, it reached upwards and kept growing straight up like a spear. It was tough enough to support it’s own weight until it was more than 10cm high. As it grew and toughened, the stem lost the bristles and turned green. The growing tip – at least 5cm of it – remained whitish and hairy.

Once the stem found the support of the tripod, it curled around the leg and kept growing until it’s weight caused it to lean over and find the next tripod leg. It took only 3 weeks for it to wind it’s way to the top of the tripod. When it couldn’t find anything else to latch onto, it slowed it’s vertical growing and started putting out leaves in earnest.

The bangkwang plant puts out leaves in threes. If they were in pairs, I’d say they looked like a bowtie or a butterfly with wings spread. However, they also have a tendency to curl in at the edges, and I later discovered that certain insects find this alluring… 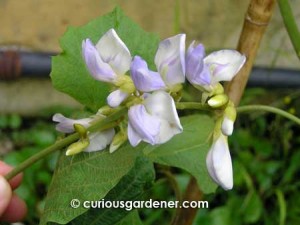 Picture-worthy flowers of the bangkwang plant.

The plant was just over a month old and quite full of leaves when we had some heavy rainfall. Since it didn’t have a secure grip on the bamboo tripod, the whole vine fell in loose loops around the tripod. I still had it in my head that it looked very serpentine, so I left it as it was. My other reason (excuse) was to see what would happen next. Well, it continued growing, but once the growing tip grew under a bunch of it’s own leaves, it stopped growing and other branches that were higher up began to expand and work their way up the tripod again. It was fascinating.

The plant was about a month and a half old when I noticed what looked like flower buds developing. I watched for about 3 weeks while the buds grew and swelled into green buds that eventually opened to allow pale purple petals to push their way out and open into the most delicate, artistically coloured flowers I’ve ever grown – white with purple streaks that looked like an artist had brushed them on with incomplete strokes. Gorgeous! 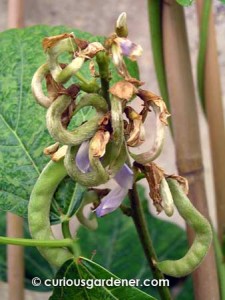 Bean pods of the bangkwang plant.

So now that I had flowers, I began waiting expectantly for the pods to develop. Insects were visiting the flowers regularly, but it took a whole month before I noticed the tiniest curl of a hairy pod hiding in a cluster of flowers. Just in case my eyes were deceiving me, I got the camera, took a picture and zoomed the picture.

And once they started appearing, it was with a vengeance. Need I mention how pleased I am?