It’s been about two months since I talked about my attempts at growing sweet potatoes, so I thought I’d give them the spotlight today.

First, there’s Mama Sweet Potato’s Place – the plant/patch that provided me with cuttings to grow more plants. Several bunches of sprouts erupted from that one potato, and being a first-time “parent”, I decided to protect the spot with an old flowerpot stand. 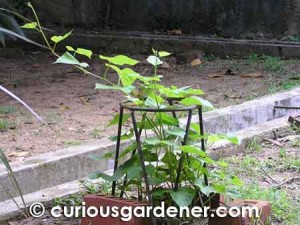 Rising to the challenge - but a bit too high, perhaps!

Good sense finally kicked in and I had to let Mama SP off my apron strings and let her spread out as she’s supposed to. The stand went away, but I marked the spot with a couple of sticks, just to make sure the dogs didn’t trample the main stems. As I’ve said before, my dogs have the knack of doing just that, so I play safe rather than sorry! 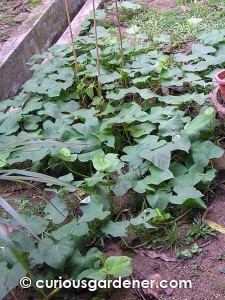 Mama SP marking her increasing territory day by day (at 9 weeks old). All I need to do is keep making sure the stems don't grow into the drain that I unwisely planted next to.

Mama’s “Place” keeps growing, but thankfully not as voraciously as I’d feared. That patch is about two square metres at the moment, and I’m hoping it smothers the grass that’s growing there. Go, Mama, go!

Then there’s the other sweet potato patch that was started from cuttings from Mama SP. I put in five of them in early April and was supposed to do more successive plantings, but I guess I got lazy. Heh. 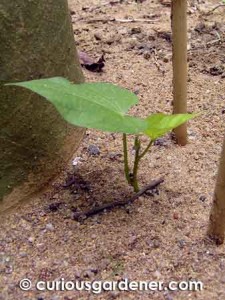 Sweet potato growing from a cutting - again, well protected with stakes and an old, unused flower pot. I am protective of my babies!

I have to admit that I was somewhat sceptical about actually getting a harvest from cuttings – but that’s my Doubting Thomas Syndrome acting up as per normal. People do it all the time so why can’t I? If the potatoes form from the energy accumulated by the leaves, then there should be lots of growing happening underground right now! It’s probably too early to dig and take a look, isn’t it? But I may be curious enough to try that sometime soon… 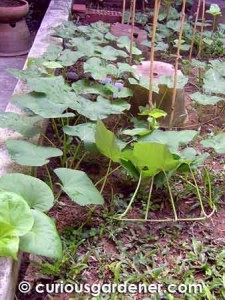 Not as advanced as the grown-from-potato patch - but then it's about 3 weeks behind.

So, let me refresh my memory again… It takes 3 to 6 months for the sweet potatoes to develop, so I still have a wait of another month or four to go. Good thing I have a bunch of other plants that keep me entertained, because there isn’t much excitement in watching sweet potato leaves growing…