When I first decided to start growing corn, I did what most first-timers do – I went out and bought a packet of seeds. It looked so exciting – a F1 “super sweet” Sweet Corn hybrid. I couldn’t wait to get started. 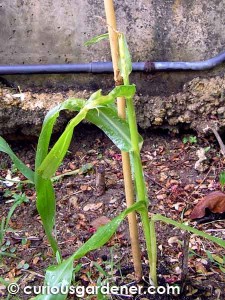 Before I did, though, I tried to plan ahead and stagger my planting so that we wouldn’t have a glut of corn all at one time. Whether that was a wise idea, I don’t know, because after I did 3 plantings, I read about how you need a whole cluster of plants so they get a better chance at pollination – which the wind helps with. I’ll have to try hand pollination when the time comes, I guess. Live and learn.

Anyway, the planting instructions were straightforward – how deep to plant the seeds, how long they would take to germinate, and how far apart to space out the plants. No problems.

Then I realized the leaves were being attacked by something when they were about a foot tall. I believe I mentioned in an earlier post how I hated that the leaves looked like long grass, right? Now couple that with how dogs eat grass when they’re not feeling well and that our dogs enjoy chewing corn cobs… Yup, the dogs were responsible – partly or in full, I don’t know – for the eaten leaves. So a barrier had to go up around the corn plants. 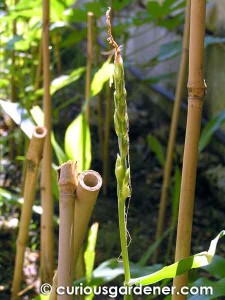 Top of the corn plant - can it be pollen developing?

So now it’s been 8 weeks since I planted the seeds. That’s almost 60 days, and the instructions on the packet say it’s 75 days to maturity. So it was with some excitement that I noticed something different happening at the top of one of the first plants. Some sort of stringy thing had grown out, followed a few days later by what looked like green grains forming. Those developed into what looked like long, yellowish grains hanging on by a thin stem. Pollen? I thought excitedly.

I was so focused on those developments, and visiting the plant daily to take photos that I later realized from the photos that something else was happening at the base of the plant. A bit of swelling that eventually separated from the main stem and has now started sprouting silky tassels. A cob? I thought in great excitement. 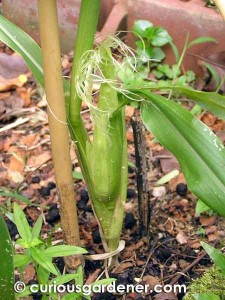 Cob forming - at the base of the plant?? Something's not right here...

Again, I was so focused on these developments that it took a few days to hit me that the plant was kinda short. Less than half a metre short, to be exact. It hit me that it was very odd, but after all the trauma the plants have been through with the dogs and other (if any) unidentified pests, I have no idea how they’re going to be affected in the long run – which is actually not all that far away. For now, I think of them as my mutant, guinea pig corn plants. If they can fruit, that would be great (but I don’t have my hopes up). If not, then I’ll start again with different seeds in a new location and hope for the best. But it really bothers me that they’re so short. I’m going to grow sunflowers to have tall plants… just for the heck of it!