As I watch my veggie babies grow and develop, I’ve found my curiosity drawn to how my vining plants work their way upwards. Long, thin tendrils reach out unerringly for the nearest unmoving object where, on contact, they wind themselves firmly to hold up and support the main plant as it continues on it’s vertical journey. 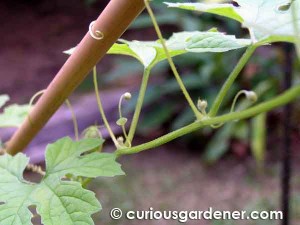 Bittergourd vine (with possible flowers forming!) hanging on as it works up the trellis, with tendrils forming interesting curlicue designs.

This has been a bit of a chore for me where my bittergourd plant is concerned. If you remember, it started growing out of my big pot of Japanese Bamboo (dracaena surculosa), the seed kindly deposited by bird or creature unknown. A few people identified it by the leaves, and rather than uproot it, since Mother Nature decided to gift it upon me, I left it where it was and trained the vine to grow onto my compost pit fence. However, being only about a metre high, the fence posed little challenge to the creeper, and I had to hastily construct a better trellis for it to grow on. Let’s just say I add on as necessary.

But back to my point about tendrils.

In the initial stages, I had to keep unwinding them from the handy Japanese Bamboo and onto the fence and trellis. It seemed like one day I got the tendril attached and growing where I wanted it, and the next day the plant would once again be leaning towards the Japanese Bamboo with a new tendril stretching out for forbidden land, like an unruly child. If I could move the pot away, I would, but the bittergourd is growing out of it and I didn’t want to have the vine exposed to an accidental severing. So it will need constant vigilance, as Professor Moody is wont to say. Nevertheless, it’s making good progress up the trellis and looks like it’s about to start flowering. *cheering* 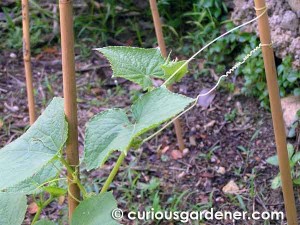 Cucumber tendrils reaching from one leg of the trellis to another. I had nothing to do with that, and am proud of my cuke's "musclepower" :)

How do they decide to grow the way they do?

I have no idea. They just seem to have blind instinct and a mind of their own. My young cucumber plant was working it’s way up one trellis leg and decided that it needed to reach across to the other support … and it did. All on it’s own! Logically, to me at least, the plant should have followed the same support upwards, but again, like a child testing boundaries, it had to see if it could reach across a 20 to 30cm gap instead. Well, mission accomplished, it could and it did. 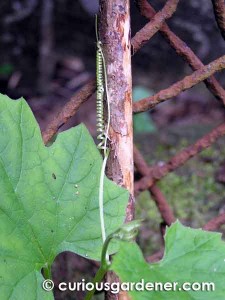 As for my loofah plants – the last of my tendril-bearing veggies – they’re making their steady way up an old chainlink fence that I’d like to conceal. Not that this kind of tendril is unique to the loofah, but it’s the plant I got the picture from. I’m talking about the cute, tightly curled tendril that looks like a tiny green spring. I haven’t found information that backs my theory up, but I think the tendril resorts to coiling itself that way to support itself as it keeps reaching straight upwards for a solid support. It’s exactly the sort of thing Mother Nature would come up with, and I’m in awe of her ingenuity. It’s truly fascinating and inspiring to watch nature at work. I’ll never grow tired of watching and learning.