It’s odd that it’s only been four weeks since we finally left the dry monsoon season in it’s own dust and started getting rain more regularly. Somehow, it seems much longer than a month. The dry, withering lawn is green once more – although it’ll be another month or so before I consider it “lush” – and the only areas of brown are patches of earth where the grass hasn’t grown back yet. Or where the dogs have… well, never mind.

The break in the weather brought out my desire to start playing with the packets of seeds that I’d been holding on to. Why did I choose to wait? Because of how my snap beans were behaving – flowering and aborting for over a month. I figured the weather wasn’t right yet. But, once that changed, so did my plans.

As you know, my whim right now is for vegetables, and I’d accumulated a nice variety of seeds – Marigold and Torenia flowers and lots of veggies – long purple and round green brinjals (eggplant), chilli, pepper paprika, loofah, cucumber, tomato, hairy basil, okra, long beans and sweet corn. It was time to start my little veggie “family”. 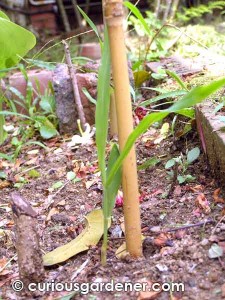 I was most excited about the sweet corn, so that was planted first. I wanted to stagger the harvest, so I decided to plant three to four plants every other week or so. The seeds sprouted well and the older lot is over 20cm high now. I had to mark the spot of each plant with a short stick to remind everyone, including myself, not to touch them, because they really, really look like grass, and I have an uncontrollable urge to weed them out! I can’t wait for them to grow even bigger so that I can stop thinking that…

And marking where you’ve planted seeds is so very crucial. I had planted three loofah seeds along the fence, thinking they’d take about a week to sprout. On day four, someone went around with a weed-whacker and beheaded one of the little sprouts that were already 5cm high! I had no idea that those little fellas would grow so vigorously! Anyway, I’ve decided to stick with two plants for now because I’m not sure if I’ll really enjoy eating the fruit. At the very least, I suppose I’ll end up with some natural scrubbies…

The plants are about 15cm high now and busily extending tendrils for support. I’ve been directing them towards the chain-link fence and then they should be on their way.

One little problem, though – the seed leaves of one of the loofah plants developed some weird, squiggly marks that a GCS Forumer said were the work of leaf miners. I’ve removed the offensive leaves and have my fingers crossed that the plant won’t be affected by the miners. Talk about your alien invasion…

The long beans germinated with no problems. Beans seem inclined to vigorous growth. I set up a trellis for them using 6-foot bamboo sticks in the A-frame setup, and the most advanced plant has already wound it’s way to the top of it’s pole. One seedling was a bit sickly, so I had to get rid of it and plant a new seed in it’s place. I didn’t enjoy that at all. Culling is not my thing; I’m more inclined to let all my plants just grow and be happy. 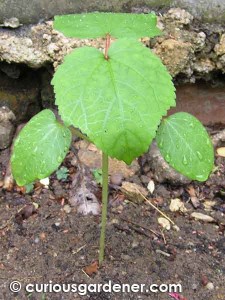 The okra plants – or ladies fingers, as we call ‘em here – grew with no problems. All five seeds that I sowed in a pot grew cheerfully, and once established, I transplanted them to a prepared plot where they’re thriving right now. Less than 8 weeks to harvest! (fingers crossed)

The pepper paprika put up one, maybe two sprouting seedlings. I say maybe because I’m not sure of the second seedling will survive. They seem to be quite fragile and can die out after a day or so, which has happened twice already. They’re slow growing, compared to the okra and loofah, but I’ve definitely got my eye on them…

I’ve had 50-50 success with the cucumbers. Only half the seeds sprouted where I’d sowed them at the base of another prepared trellis. After waiting more than a week since the first seeds sprouted, I decided to re-sow seeds at the vacant trellis legs. I’d really like to have one plant growing up each trellis support, and by George, I will have that! There are still several seeds left in the packet, so I’ll keep trying until I run out of them… 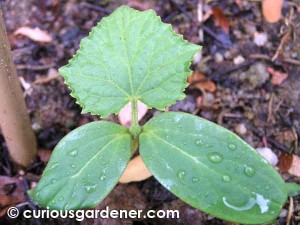 Now the rest of the seeds that I planted in pots are playing hide-and-seek with me. Interestingly, they seem to be the plants with smaller seeds – namely the brinjals, chilli, tomato and basil for the veggies, and the marigold and Torenia flowers. Man, those seeds for the Torenia were microscopic! It might as well have been powder in the packet! Anyway it’s been more than 3 weeks and I’ve gone through two rounds of sowing seeds. Nothing’s showed up except for one tomato, one marigold and a couple of chilli seedlings that died off after a couple of days. I’ll lay a bet that the seeds are just waiting for me to stop peering down into the pots several times a day before they all decide to simultaneously sprout! Isn’t that what happens when you watch a pot of water on the stove? It only starts to boil when you turn away… Hopefully those naughty seeds will miss me and burst into activity. Nothing makes my day more than seeing my plants thriving!