My snap beans that had been planted in January were supposed to mature by early to mid-March. I know I made a big deal about the profusion of flowers that came out in late February, but they kept aborting, and I despaired that I’d ever see any beans. In fact, a couple of the plants died, and I was convinced that I’d been gypped with this lot of seeds. Or maybe that they weren’t suited to our climate.

Well, I had a happy Easter surprise when I took a look at the beans today. They must have started doing something right this week, because there was the very first tiny bean hanging off the vine! It made me feel like an expectant parent who sees the tiny, fully-formed hands and feet of a foetus in an ultrasound scan… Well, I’ve nurtured the plant so I’m entitled to some parental pride, right?

Actually, just before I noticed that bean, I wondered what was wrong with some of the flowers. There seemed to be some kind of blister of sorts at the base some of them. Yes yes, I know… that’s the ovary of the flower, and the fact it was doing something unusual should have clued me in. Can I get some points for finally getting it? 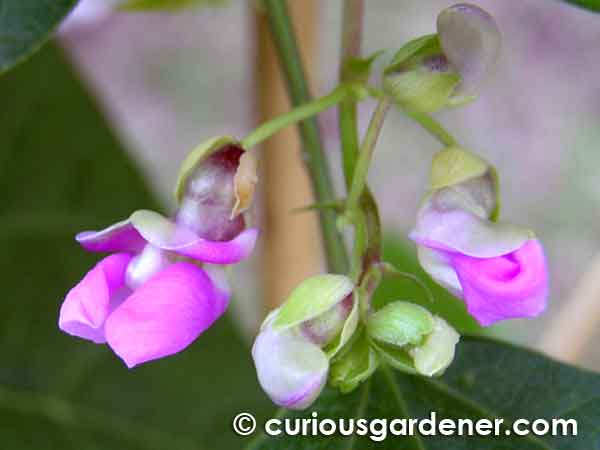 Pollinated flowers beginning to fruit. Notice the burgeoning beginning at the base of the flower on the extreme left?

What seems to happen next is that the bean begins to form, growing outwards and pushing the protective petals downward in Nature’s very own striptease. *cue sexy music* 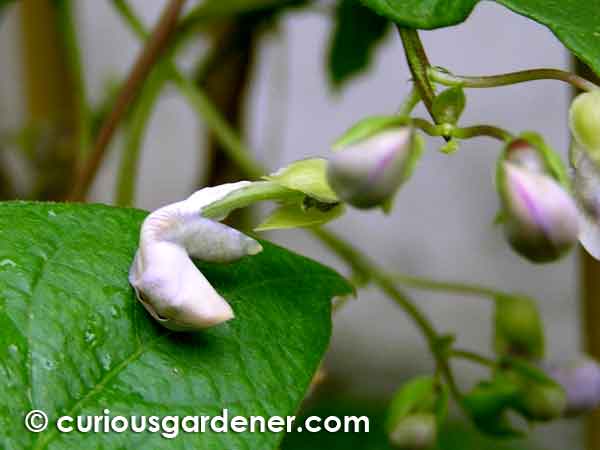 Finally, the petals fall off, leaving the bean to form in full glory. 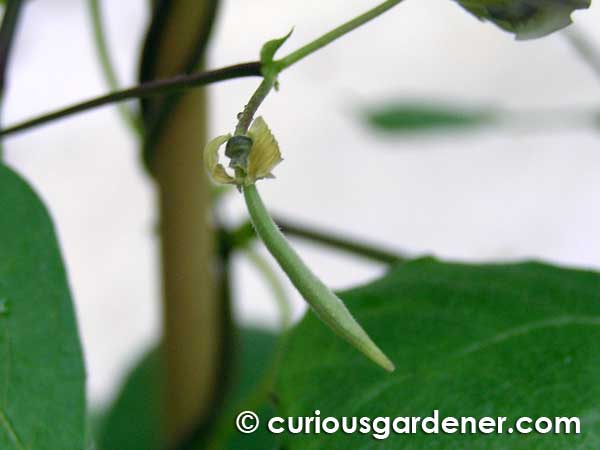 Fully formed and growing bean, just over 1cm long, looking like a pirate's cutlass with the curling sepals at the base of the bean. Arr, me hearty, grow! Grow!!

So I’ve noticed several pollinated flowers, and a couple of stripteasing beans. It’s just a matter of time waiting for Baby Bean to grow up and have more siblings…..