So it happened again. 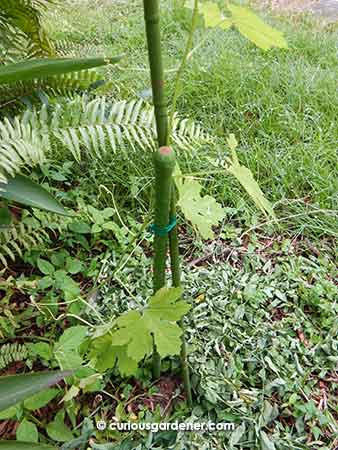 The bittergourd plant that sprouted in the undergrowth beneath a peacock flower tree, now protected by a pair of poles and a heap of mulch.

One of our plants – this time the small bittergourd – reached the end of its productive life, and we hadn’t started the next plant yet… and then I noticed a volunteer plant that had started growing where I wouldn’t have planted one – in the undergrowth beneath one of the peacock flower trees. It had managed to climb over two metres up the tree, which is why I noticed it – I’ve always found the leaves quite ornamental, and they caught my attention.

I don’t like wasting such opportunities, so I first considered pruning the tree to a shorter height and allowing the vine to grow on it. However, after pruning part of the tree, which is just in front of the house, we realised that it was actually shading the house from the sun, and that it was noticeably hotter, so a change in plan was needed.

Since I’m not averse to putting up trellises as and when necessary, it was time to do a little quick DIY work. The first thing to do was protect the spot where the plant had started growing. This was especially important as it’s an area that we’d likely go over with the strimmer when it’s time to cut the grass and weeds. I stuck the minimum two poles in – one for height, and the other to support it – with the vine between them. 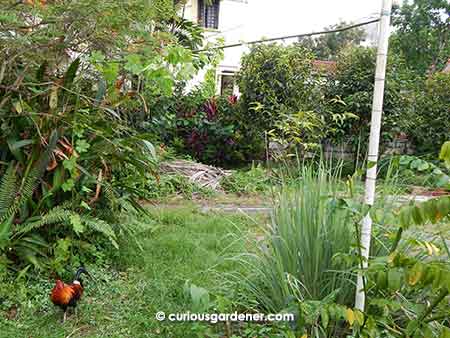 You can’t see it that clearly, but the bittergoud plant starts just behind the rooster – up the poles, then across to the right to the taller white pole. The vine is only about halfway across the horizontal pole at the moment. The second white pole is out of frame.

Next, I needed to provide some horizontal growing space for the vines, so I connected the top of the taller pole to another pole that happened to be about two metres away. That pole had a companion next to it, so I added another connection, creating a triangular area.

With the construction done, it was time to gently detach the vine from the tree and wind it around the trellis and give it time to settle in to its new home. The vine only reaches about halfway across at the moment, and I’ll be interested to see if it wants to keep growing towards the sunny side or back towards the tree. I’ve pruned the tree so it’s not easily accessible, but when a plant wants to go somewhere, it will find a way. At the worst, I think I’ll have to keep training it until it reaches the other end, then let it grow backwards… Anyway, we will be looking forward to enjoying the little bittergourds soon.