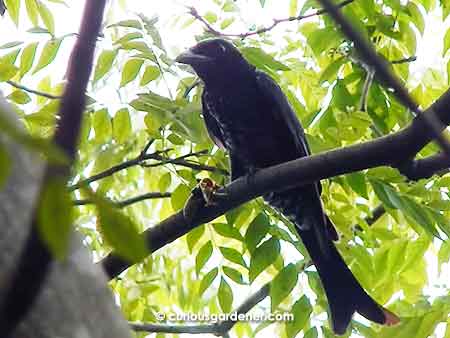 The bird with a fish tail – the crow-billed drongo.

Okay, I’m no expert on birds, so I may be wrong about the specific type of drongo, but I believe it was a crow-billed drongo that we saw perched on our curry leaf tree as it fed on the remains of a large grasshopper earlier today. It wasn’t a large bird – around the size of a bulbul or starling – and had a spotted lower body which at first made us wonder if it was a young female Asian Koel. What really piqued my curiosity, however, was the unusual shape of its tail, which looked like a fish’s tail to me, the way it was forked and turned outwards.

As I filmed it, I realised it was eating something. At first, I thought it was a small fish, because of the length and how the bird was tearing at it. Later, while reviewing my footage, I realised it was the lower abdomen of a large grasshopper.

That made me feel slightly better about not killing those large insects when I see them in the garden. Do you know that they make a literal buzz as they fly? Like any other gardener, I have the urge to chase and kill them because of the damage they can do to our plants, but if I did that, we wouldn’t have such interesting bird visitors here, would we?

The drongo alternately held the insect carcass with one foot as it pecked at it – at one point arching and jerking its whole body to yank out the innards – and tossed it upwards with its beak to chew on it. When it had consumed everything, it sat in the tree for a while before flying off.

It was only later that I was able to identify it and learn that there are four species of drongo here in Singapore. One is a resident while the others are migratory visitors. Ours was the latter (assuming I’ve identified it correctly!). What a lovely encounter!