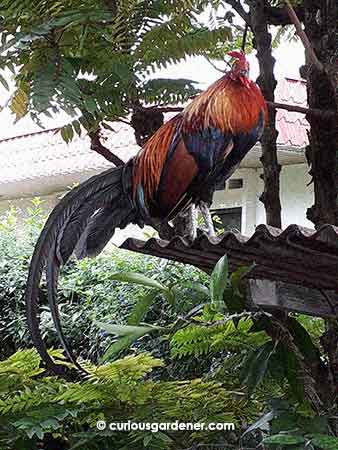 Our almost-resident rooster on one of his favourite perches.

If you’re familiar with the Chinese Zodiac, you’ll know that 2017 is the Year of the Rooster. For whatever reason, we’ve been quite blessed this year with the presence of our neighbourhood’s wandering rooster. He’s been around for several years, starting off with very brief sightings. Then those became occasional day visits, prompting us to speculate that he belonged to someone somewhere down the lane. Then one morning we were delighted to see that he had stayed overnight in the curry leaf tree.

His visits used to be few and far between. We’d see him once every few months, then the timing closed to every few weeks. This year, he started visiting for longer periods of time – a couple of days, then he’d disappear, only to be heard crowing in the distance. I’m not convinced he belongs to anyone from the way he seems to travel so far and wide. However, he’s begun to stay for longer stretches of time. A few days became a week. A week became a couple of weeks. Now we’ve finally hit the “month” stage – he’s been here for almost two months! 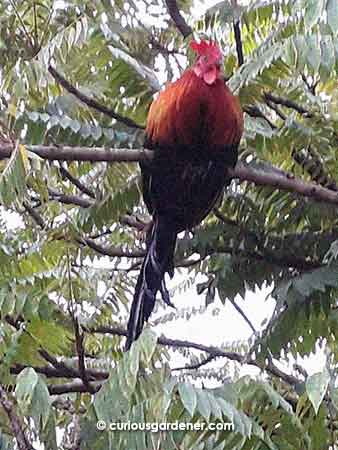 The rooster perched up in the belimbing tree late in the evening as he settles in for the night. Yup, he sleeps up in trees!

We’ve all become very accustomed to each other, meaning the humans, dogs and Mr Rooster. He is comfortable around family members that he recognises and just minds his own business even if we pass within a metre of him – and by “we”, I mean both humans and dogs. He has also made himself comfortable in different parts of the garden, going to specific spots at around the same time every day. And he greets the neighbourhood every day (not necessarily only in the mornings) with his strident, repeated crowing.

It looks like we may have been adopted. Or, perhaps in typical wandering rooster fashion, he will traipse off to another corner of the kampong and entertain another family for a while. However, I feel that he has earned his place as part of the totem of this blog.