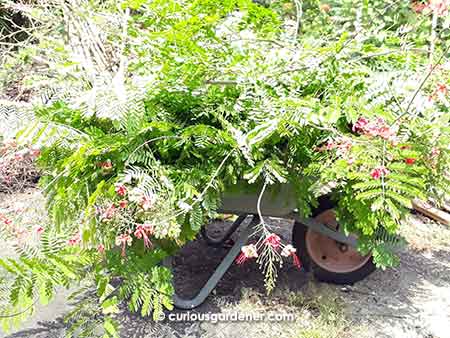 A wheelbarrow-load of pruned branches (yes, there’s a wheelbarrow under all that!)

I know I’ve been really quiet on the blog for the past several weeks, and I have the usual Singaporean excuse of working long hours and not having much time and energy left for working in the garden on weekends. There have been some pockets of opportunity, though, which I’ve made use of – those perfect couple of hours when the mood strikes and the weather is agreeable – and some progress has been made in returning the place from a mini forest back to a conventional garden. 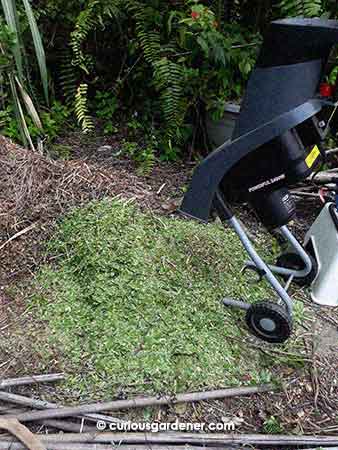 The green pile represents the entire wheelbarrow load from the previous picture. Amazing how compact it all becomes when reduced in size, isn’t it? The brown pile is from previous shredding sessions.

It’s at times like this that I’m so thrilled to have the garden shredder at my (pun intended) disposal. It turned one piled-high wheelbarrow load of Peacock tree branches into a small heap of wood chips and leaves. And, I know that in two to three months, that small pile will have already decomposed into nice, dark compost. I love my garden shredder! It’s been getting a good workout from the new branches as well as old ones that we never got round to chipping up from last year because I wasn’t able to work outside that much. 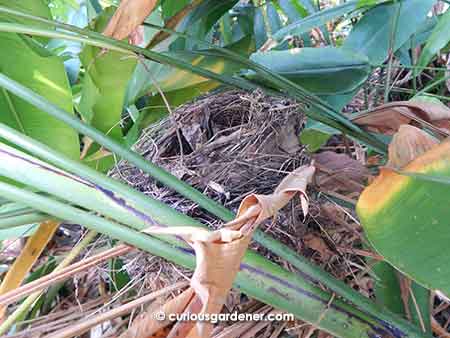 The best made bird nest that I discovered in the middle of a tall patch of heliconia plants!

The downside of starting to clear the overgrown parts of the garden is realising that we are reducing animal habitat. I’ve joked about the place being a nature reserve, but there’s truth in that. My assumption of the increased number of birds here was that they were feeding here; but in clearing the overgrown areas, I’ve already discovered a few bird nests. Thankfully, none were occupied. 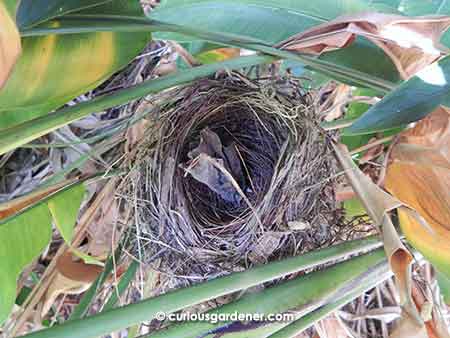 Just look at how thick the nest is!

We’ve been clearing up slowly – a bit each weekend when possible – and working inwards from the edges, a little at a time. It was my hope that whatever creatures may be inside would get the message that their habitat was being reduced and know that they needed to move out soon, before we reached them. So far that seems to have worked. 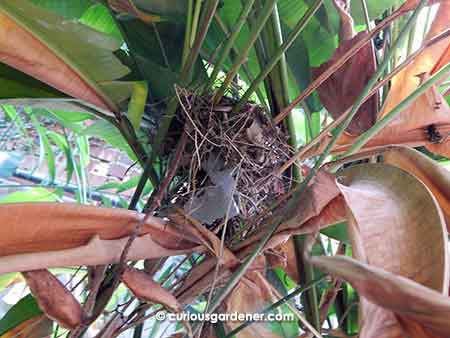 View from below – see how well shaded the nest is from sun and rain?

We are trying to work out the best balance between nature and us. Under permaculture principles, the garden is divided into different zones, with zone 0 being the home in the centre, then moving out in concentric areas from one, which is the most “domesticated” and managed, then moving outwards in progressively less managed zones to five, which is where nature runs rampant. It’s good for each garden or neighbourhood to have that little area for birds and other fauna to claim, and we intend to do that here. We love seeing and hearing the different critters, and daily hearing the calls of bulbuls, mynahs, doves and sunbirds, and also dollarbirds and the Oriental magpie robins, to name those we can identify. I’m glad that there are other pockets of nature in the neighbourhood, whether private gardens or public areas, that form habitat for birds especially. The only birds I don’t wish to nest here are crows, because of their territorial behaviour during breeding season. 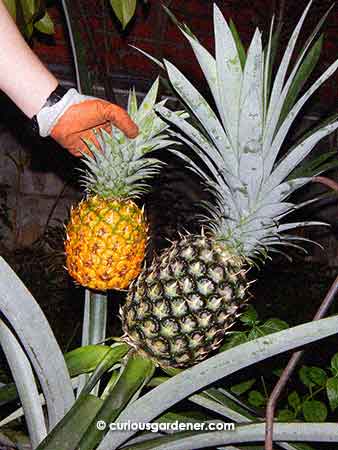 The ratoon pineapple is much smaller than a regular pineapple!

In my quest to make a comparison between ratoon and regular pineapple, I think the photo shows it clearly that the ratoon fruit is only about half the size of a normal pineapple. However, it also takes half the time to produce a fruit – about a year, versus two or more years for a regular pineapple. I’ve said it before and I’ll probably repeat it many times – I don’t know how the commercial growers do it! You’ve got to be supremely patient to grow these fruits! 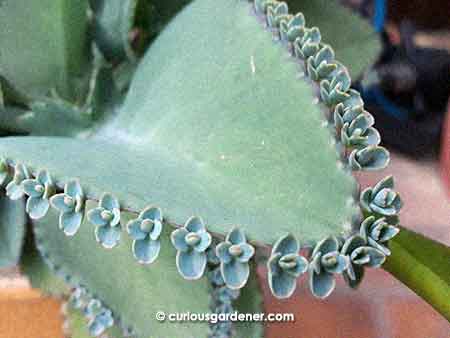 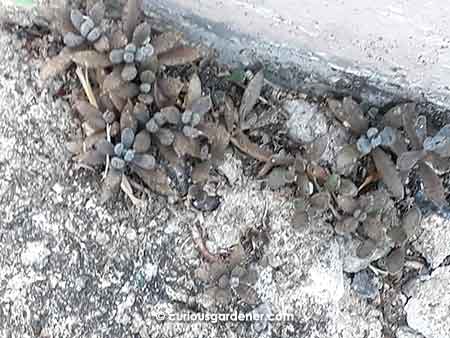 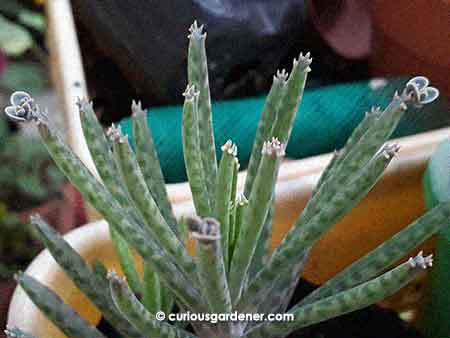 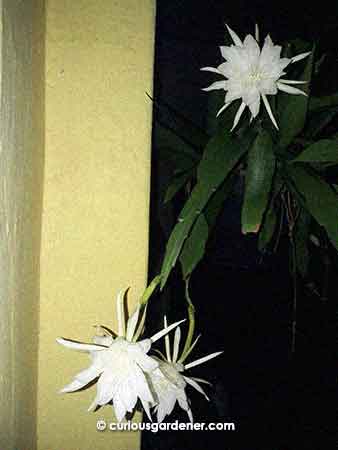 Three flowers at a time – we love multiple-bloomers!

So the new white Keng Hwa flower plant that I bought from World Farm finally decided to bloom! I was intrigued to see that the flowers are smaller than what we’re used to, and that there are subtle differences in them. 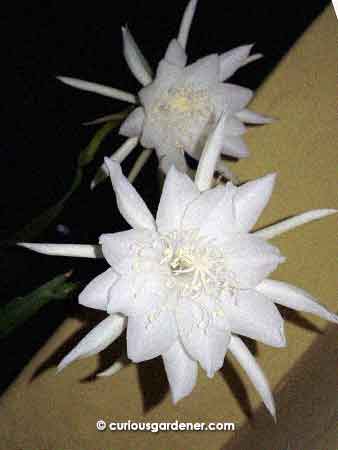 These flowers look so pristine because they’re all white. Ghostly, almost… And, the petals are shorter and broader than our original plant’s. The perfume of the flowers was also not as strong, and it appears to be a more willing multi-flower bloomer. 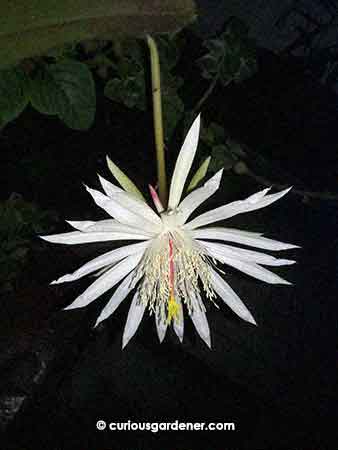 Our original Keng Hwa flower has the eye-catching red and yellow stamen, and an incredibly strong aroma when it blooms. Our usual guide to when they’re blooming when we don’t expect it, is the heady perfume that invades the house late at night – something that the smaller flowers can’t do as well.