I’ve been getting worried that the plants I started from seed at the beginning of this month were starting to get pot-bound. As a matter of fact, as a quick remedy, I put the pumpkin and watermelon plants in bigger individual pots during the week, until I have the time to plant them out.

Well, and when the hazy weather isn’t so bad. 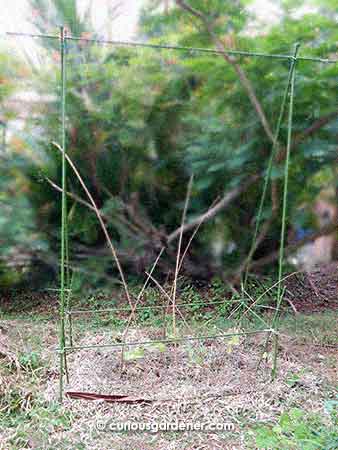 The planted bed below the A-frame trellis. I didn’t make it too wide because I thought I was going to plant just a few bean plants (and they don’t live that long anyway), but the side poles are tall at about 2 metres high.

It was a little bad yesterday, and I wasn’t up to being out in it then after being caught in it on Friday evening when it edged into the 200+ PSI zone. So, when it looked a bit clearer today, with passing showers included, I decided I had to make the most of the opportunity and get planting.

The plants of most concern to me were the long bean and okra plants. The latter, especially were looking quite poorly, and I was anxious to get them planted out.

As you well know, long beans need to climb, so I decided to set up a quick A-frame trellis. I had the A-ends ready a couple of weeks ago, and it was a matter of choosing where to set it up (decided on next to the dog-made swale). I also had a trellis net that I’d bought from Daiso (the gardeners’ toy store!), so I figured it would be a quick thing to set up.

As I was doing this, I suddenly realised that the spot I had chosen was where a lot of birds like to fly, and that the netting could pose a danger to them. So, I ditched the net and decided to go with another option, which is to tie one end of a string to the top bar of the trellis, and loosely tie the other end to the bean plant to hold it up, and train the growing tip around the string. Unfortunately, I was out of string today, so I poked in a few stick supports for the plants to grab onto first. With my luck, I won’t have time to do this until next weekend, so this is probably for the best. I’m pretty good at winging things where DIY is concerned – I once kept adding to a trellis setup as the plant was growing, and it worked just fine, so this should, too!

With the frame ready, I next had to get the plants – and it occurred to me that I don’t have to grow just beans there. There was a nice rectangular area at the base of the trellis, and I decided to plant the row of bean plants along the front edge, and a couple of okra plants on the outer edges of what I was now viewing as a planting bed, and completed by interspersing a couple of flowering plants that I had lying around. 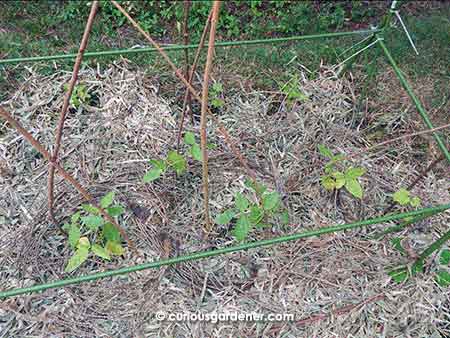 The plants with a thick layer of bamboo leaf mulch (remember to keep the mulch away from the stems of the plants!) with bits of dried palm tree flower bracts around the plants. The bracts should also keep the bamboo leaves from flying around too much.

After finishing the planting, I watered each plant well, then added a layer of mulch consisting of dried bamboo leaves that I got when my neighbour pruned his plants, then I topped that with dried flower bracts from our palm trees.

Why use the flower bracts, you may ask? Well, I’ve noticed that when they fall from the palm trees and land on the grass beneath, the grass always grows eagerly over them and benefits because the bracts are quite woody and absorb and retain moisture after it rains. It may be our local equivalent of using wood chip mulch, I guess. Also going with the wood chip mulch method, the reason I kept the bracts on the top is because they’re woody, and wood absorbs nitrogen when buried; this in turn robs the soil of nitrogen, which affects the plants. I’ll discuss this more in future posts. Anyway, this is my first experiment with them, and we’ll see how it works out.

Anyway, I’m glad I got some of the plants in their permanent homes this weekend. There’s more to do, though… there always is!