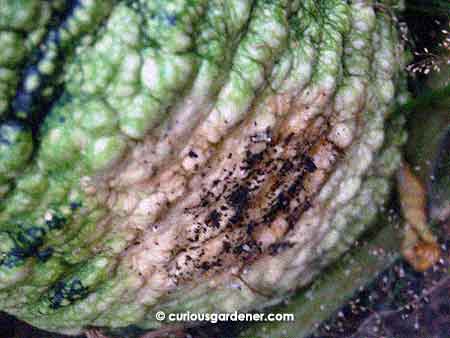 This does not look good. The pumpkin skin looks like it’s starting to rot. I hope I caught this in time.

I had a shock when I went to check on the pumpkins today. They’re all developing very nicely and have been changing colour to a very dark, almost black, green. Since this looks similar to the picture on the seed packet, I figured it might be almost time to harvest them.

Yes, I know they’re less than a month old, but one can be hopeful, right?

So I tentatively tried the fingernail method of testing their maturity and got good resistance. Then I looked for the tendril near the top of the stem but honestly, am not sure what it’s supposed to look like. Then I tried rapping on the fruits and got a nice hollow sound in response.

Check, check and check. They ought to be ripe, I thought. Then I picked up the biggest one to feel how heavy it is. It was pretty heavy. So of course I had to compare the others. That’s when I discovered that several of them had unhealthy pale patches where the fruits had been resting. 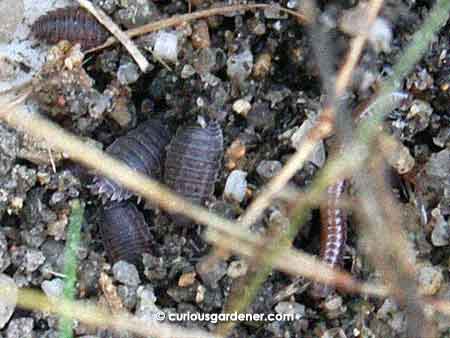 Not just that, the discoloured patches were moist, and there were insects that went hustling away when I lifted the fruits! I don’t know what they all were, but there were a few millipedes and some aphid-like insects that I usually see in some potting mixes. I’m sure they have some function in nature – like the millipedes eat decaying plant matter (which doesn’t comfort me as I’m now worried that the pumpkins are decaying).

Things that did not go running were mealybugs nestled in the many nooks and crannies in the pumpkin skins. I was so upset then I saw the most infested fruit that the stem broke because I was twisting it from side to side to see the extent of the mealy infestation. Oops. The same thing happened with the next fruit, which had mealies but only a little discolouration. Double Oops. 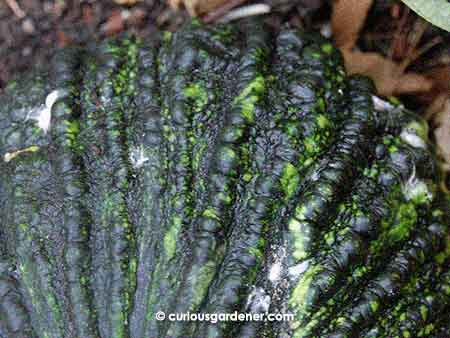 Look at those mealybugs attempting to take over the pumpkin! Begone mealies! :(

Since I had the fruits off the vine, I decided to rid them of the mealybugs, in case the pests spoiled the fruits more. It may not have been the best thing to do, but I washed the pumpkins thoroughly with dishwashing detergent, making sure to work up a good lather to kill the mealybugs (hopefully) before rinsing them off and drying them.

My concern now is whether the other fruits are going to be compromised if I leave them there, and whether or not to save them sooner than later. 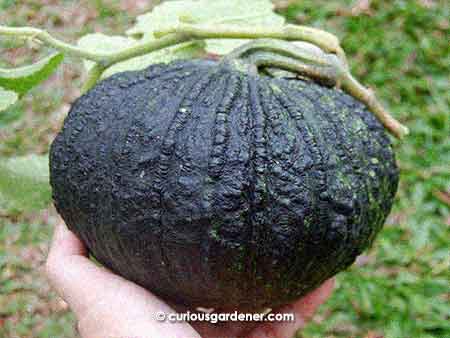 Because I don’t want this post to have only icky photos, here’s a nice angle of the Double Oops pumpkin.

Oh, I also forgot to mention that white flies have started setting up home under the leaves of the pumpkin vines. I’m personally inclined to harvest the fruits now and cull the vines before the white flies and mealybugs get too numerous.

Novice Gardener, the only gardener here I know who grows pumpkins, let me know if you have any advice. Mother Weed, no need to say it – I know you’d chop and throw immediately!

I really dislike it when we get this close to harvest and bugs come along and spoil the anticipation.