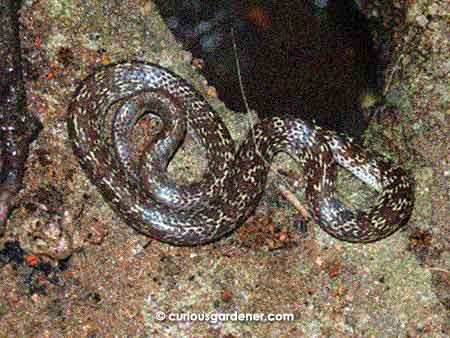 The young Lycodon Capucinus slowly unfurling and starting to look for a darker place to hide, when we lifted the box to look at it.

We had some rain over the weekend, and I noticed that one of my temporary growing boxes – a short recycled styrofoam box – had flooded. I have it just next to the house, over the drain, which has cement covers. Since it’s on the edge of the garden, I decided to tip the water out onto the earth. I certainly did not expect to see a young snake curled up beneath the box when I did that!

No I didn’t drop the box and run screaming – I drained the water as I’d planned to. Once I’d accomplished that, I went in search of my brother, who’s a little more comfortable with the idea of snakes than I am. 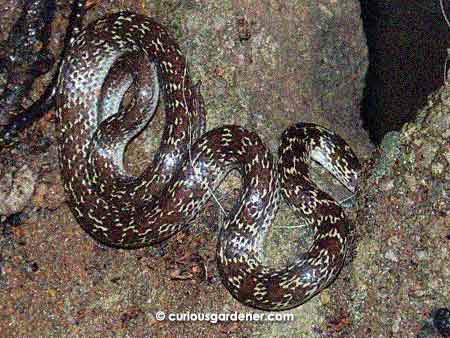 A slightly different angle to show the patterns of the snake. It already had its head hidden as it headed into the drain.

It certainly didn’t comfort me when he looked at the snake and opined that it was rather small and had probably been born recently, and in our garden. And after he mentioned that, I realized that the dogs had been up to quite a bit of mischief in that area in recent weeks, digging holes and killing half my canna plants in the process. Could they have caught the scent of the snake or snakes? Possibly. I’m just a little uncomfortable with the idea that these snakes, although non-venomous, are so close to the house, so I went scattering sulphur flakes around the outside of the house again, and hope that they keep the slithering creatures outside where they belong.