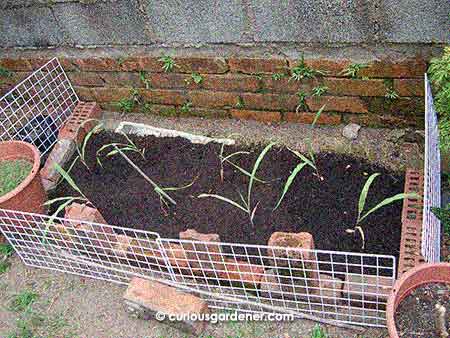 This is what I had to resort to, just to keep my young Red Aztec corn plants safe…

Planting out the young Red Aztec corn plants was a careful exercise in thought. I had to:

The area I eventually decided on was along the northern fence. It gets sunlight from morning until late afternoon, which should satisfy the plants’ photosynthesis needs.

The removal of grass and weeds (weeds being plants that grow without my permission) was and always is a hassle to me because of the deep network of grass roots. Grass looks so docile, but it’s just a disguise for the trouble you face in removing runners and roots. I was quite satisfied to place my boundary of partially buried bricks that will keep grass runners out, but not permanently, because the runners will eventually squeeze through the tiny spaces between the bricks, or burrow below, or climb over my obstacles. 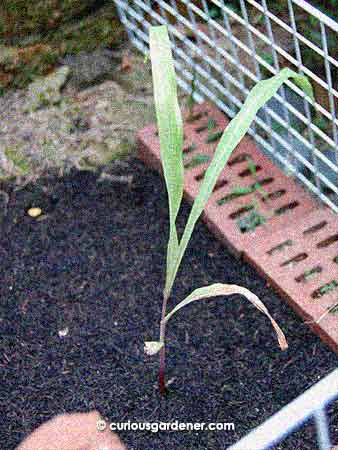 It still looks like grass to me, but let’s trust that this will eventually become a big, fat, healthy Red Aztec corn plant!

With the boundary in, I put a thin layer of newspaper along the bottom of the bed to try to kill off any leftover grass runners, then added my layer of nutrient-rich mix of purchased garden soil, volcanic soil, coffee grounds and Greenback compost. That was watered and left to mature for a few days, after which, I transplanted the corn plants, added an additional layer of compost as mulch, and watered the plants with seaweed solution to help them cope with transplant shock.

The next thing to do was put a physical barrier to keep the dogs out. They were already very intrigued by the smell of the mix of growing media, but grew even more so when they smelled the corn plants. As soon as my back was turned, they had their heads inside the corn bed and were sniffing around very interestedly. So the pieces of fencing, more bricks and a couple of potted plants were added to stand guard; and, to reinforce the fact that the dogs need to leave the place alone, I used the Dog Whisperer trick of “claiming” the area as mine. Yes, mind games do work on dogs…

And the final thing to do was claim the space from snails and scatter some snail bait around. Over the next few days, several snail corpses showed that they were around, even though I didn’t see them during my time at the plot – because I’m there during the day, and snails venture out at night. The dogs have also been respecting the area – although to prove a point, they’ve been coming to lie on top of weeds I’ve pulled out, but I’m fine with that. It would be great if they could dispose of the weeds, too, but as long as my vegetables are left alone, it’s all good. Now it’s left to the corn plants to grow well and bear fruits. It will be a first …if it happens!