You know, Singapore is such a built-up country that many of us forget that once upon a time, it was just an overgrown little island that teemed with jungle life. My parents remember when creatures like iguanas, monkeys, river fish and turtles, flying foxes and *shudder* snakes were not uncommon. My own memories of “wildlife” include the thankfully rare occasions when there was a snake somewhere in the neighbourhood, and green tree lizards and huge garden spiders lived in the big trees, and when we made games out of catching grasshoppers and ladybugs – because there were more of them then. My favourites were tadpoles that we’d catch and keep to watch how they developed into frogs and toads. However, already at that time, Singapore was steadily rolling towards taming the wilderness and modernizing everything, and we began to see less and less wildlife around, and started to lose touch with nature.

So, now that I’m trying to get my head out of all the tech and re-balance myself with nature, I take great delight in discovering which creatures have managed to adapt and live among all this urbanization – and one of the creatures I’d never thought to find in our garden was a squirrel!

Something had been agitating our dogs for a few days and we’d heard movement through the trees, but were unable to spot anything. Then, one evening, I saw something moving stealthily through one of the Peacock trees. It was a long, black shape, and rather than go nearer and scare whatever it was off, I used the camera to zoom in and see… 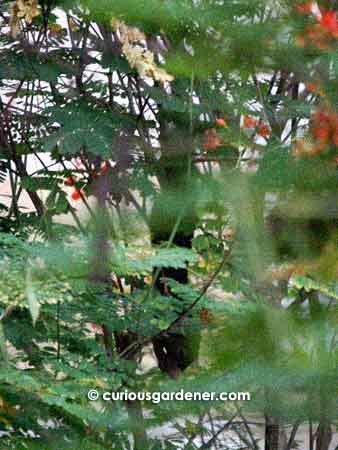 It's a squirrel hanging upside-down while eating!

It was a squirrel snacking on the dried pods on the Peacock tree! We don’t know where it came from, but it liked running along the garden wall and moving noisily through the trees, jumping from one tree to another to get where it wanted to, and even climbing up the house and going over the roof to the other side! 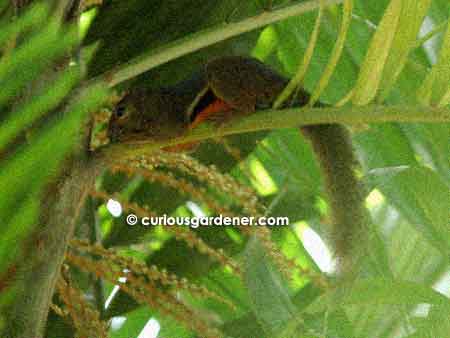 Plantain squirrel resting high up in a palm tree. What gorgeous colours, eh?

After several days of coming and going, I finally managed to get a decent photo of the entire creature, and from there, determined that it was a plantain squirrel. While it was skilled at moving through the trees, it unfortunately didn’t know enough about crossing roads. Less than 2 weeks after it arrived, it became roadkill.

This was in early 2009, and every time I hear loud rustling and crashing through the trees, I wonder if it’s another squirrel visiting. Would I want a lot of them around? Probably not, especially with all our tempting edible plants growing. Besides, the novelty would wear off if there were too many of them. For now, though, it’s nice to know there’s still some original fauna still around in our Garden City. 8)