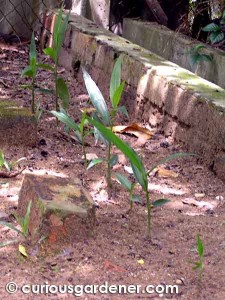 It’s been almost three months since I planted my first ginger crop. Part of my venture was to observe how ginger would fare in different growing conditions. I knew that it supposedly grows well in semi-shade, so I planted two such lots – one that gets partial sunlight, and the other with hardly any direct sunlight.

Both lots did very well, but the one in the most shade seemed to be the most eager to grow. Whenever I look at that thriving row of plants, the words “Ginger Avenue” come to mind…

The plants in partial sunlight both thrilled and concerned me. I was happy because the first-ever plant grew here; and I was concerned because only two of the four budding rhizomes I put in sprouted. I thought in retrospect that I’d cut the ginger too small, thus decreasing the chances of sprouting. Remember that I’d cut the rhizomes into as many bits as I could, with only one growing bud per piece. That was pretty ambitious and greedy of me, but I knew I had to have some room for failure, even though I privately wanted full success! 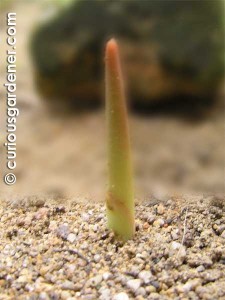 Well, that was before the weather changed. It was with great delight that I saw the last two plants sprout – and slight chagrin, because I’d assumed they were not going to grow, and had planted a bit of turmeric where they had been. So, when the new shoot showed, I thought it was the turmeric, but then it struck me that the sprouting leaves looked like normal ginger. This left me in a quandary because the only way I could be sure was if I dug it up. I was reluctant to try this because of my very first attempt at growing ginger so long ago, when I’d accidentally torn the plant from it’s roots when transplanting it from pot to ground. It left me with the impression that the roots are very fragile, and I didn’t want to take the risk.

I was perturbed for a few days until another shoot popped up, and it was different – this one was light green with a pink tinge to it, and it was straight like a spear. So, curiously, I dug up the first plant, keeping as much earth possible around it to not disturb the roots, and found it to be a normal ginger plant. I transferred it to the other end of that row of ginger where it’s now happily growing.

As for my other lot of ginger that was planted in full sunlight, it doesn’t seem to be very pleased. Although all the plants have sprouted, they seem to be dragging along when compared to the ones growing in shade. Two of them even died out after sprouting – one due to the intense Feb-Mar heat, and the other thanks to being stepped on by my dog! However, they both did start growing again, but very, very reluctantly. I decided to shift them over to Ginger Avenue to see if they would like that better. The stronger of the two has shown a marked improvement, and I’m waiting to see how the straggler will fare. 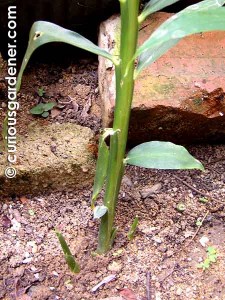 The oldest ginger plant with offshoots to either side of the stem. Click pic to zoom

Plant in a pot

I also started growing one plant in a pot, to see how it would compare to the rest that grew in the ground. Although it sprouted easily, the rate of growth is much slower than its’ free range counterparts.

The potted plant also serves as an example to my friends who live in apartments to show that they can grow ginger, too. You just have to use a large enough container. There will be updates on this plant as well, in due time.

On a happy note, my oldest ginger plant – the one that first sprouted – is thriving happily. It now has two offshoots, and I am happily letting my imagination run riot about how the rhizomes are developing underground. The earliest you can start harvesting ginger is when it’s about 4 months old, but I think I’m going to wait for my babies to come to full maturity. That could mean that I have a HECK of a lot of ginger on my hands, but my momma thought ahead and has already bought a book of ginger recipes! So I have a few months more to consider: how do I cook thee, let me count the ways…